There are numerous aspects to servicing the brakes but this discussion will focus on changing the hydraulic fluid. Although the focus here is on your dirt bike, what is presented here will pretty much apply to all of your fleet, 2 and 4 wheels.

Brake fluid needs to be changed every 2 years. This will be in your manual and is recommended by the fluid manufactures too, although with a vested interest, I guess you would expect that anyway. Why? Brake fluid, at least the non DOT 5 silicone stuff, which is generally not recommended (DOT = US Department of Transportation specification), is hygroscopic which means that over time it absorbs water. Water in the fluid when hot creates gas bubbles, which are compressible and result in spongy levers, and the water is also a catalyst for corrosion so the internals of the brakes deteriorate affecting their performance and longevity too. 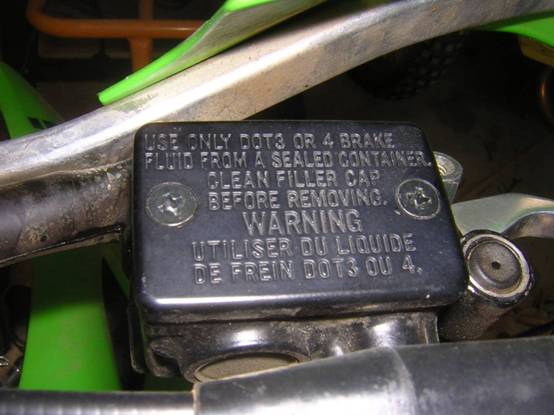 Some basic instructions appear on the master cylinder cap of some bikes such as this Kawasaki example. WARNING, use only DOT3 or DOT4 brake fluid from a sealed container. Clean filler cap before removing.

Cleanliness is all important, we do not want any contamination inside. A spec of dirt can cause problems with seals and small passages inside the system and we want to avoid it. A sealed container assists in this too, and also means that the fluid hasn't been exposed to air allowing it to start absorbing moisture. 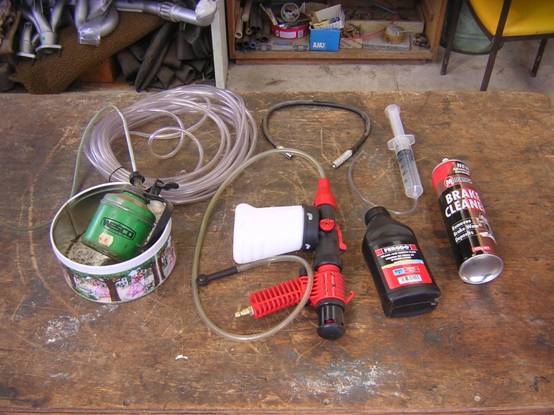 What do we need to do the job then, other than some fresh fluid? Well not everything in this picture, but at least some of it. From left to right we have:

Before we get into it, its now time to remind ourselves of what the lever 'feels' like from beside the bike. When we squeeze, where does it start to get hard. This is a useful reference, when we finish we want it to be at least as good. 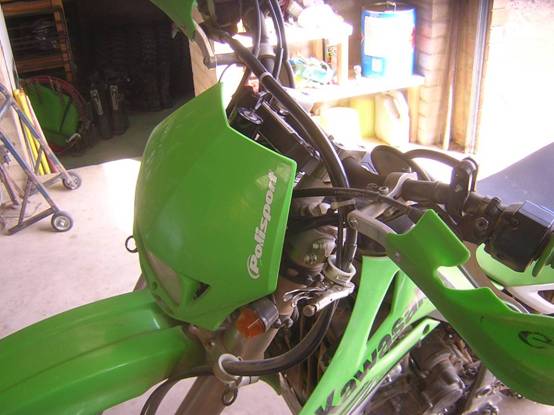 Something to consider before commencing any bleeding is where the high spots in the system are. On this Kawasaki, like many dirt bikes, the front brake hose runs up from the master cylinder before finding its way down the fork leg to the calliper. The high spots are where air accumulates and our objective is to set it up so that the master cylinder reservoir is the highest spot in the system, allowing air to escape rather than be trapped. To achieve this on this Kawasaki, with the bike on the sidestand, the bars are turned left and a small vicegrips are clamped gently to the brake hose under the top guide. Notice the 'S' bend in the hose that results below, and that the cylinder reservoir is now the high spot as desired.

This objective can be achieved in different ways, depending on the specifics of your bike. The most extreme example would be removing the master cylinder from the handlebars. If doing this it can be convenient to attach it to a spare set of bars (you knew you kept that old bent set for a reason!) which you can then clamp/attach to something.

In the picture below of my road bike, if you look closely, you can see that when I fitted a braided hose I also fitted a bleed nipple where it attaches to the master cylinder, which happens to be the highest spot on this system, and makes getting any trapped air out far simpler than it used to be. Just bleed twice, once from this nipple and than at the calliper. 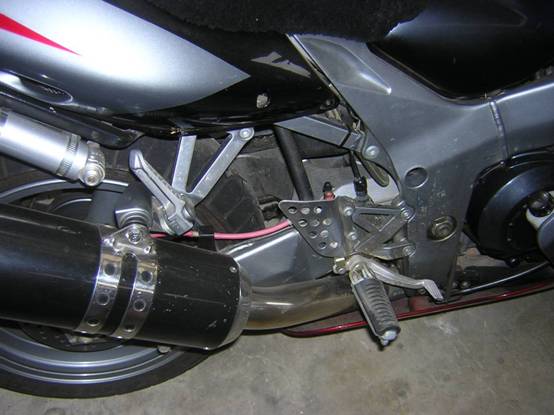 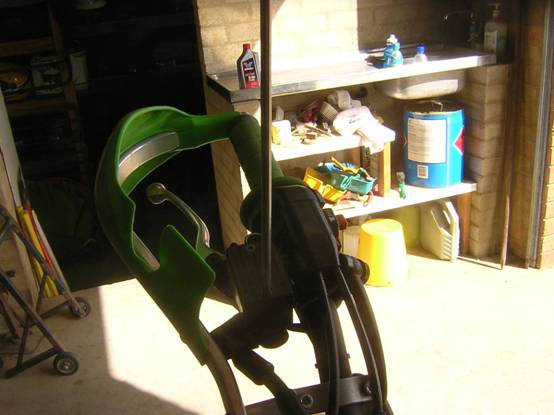 If you haven't already, clean around the master cylinder reservoir and remove the cap. 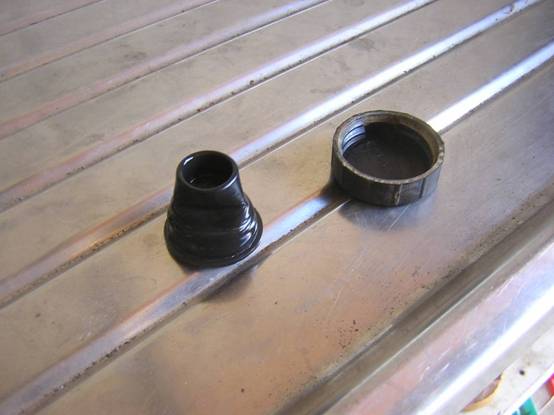 Under the cap you'll find a rubber gasket/seal "thingy". Their purpose is to separate the brake fluid from air. Note the differences in the before and after pictures of the rear brake cap and seal from the KLX.. Note that the seals are expandable. The idea is that as the pads wear and the fluid drains down into the calliper to compensate, air that comes into the system stays on top of the seal and seal expands, following the fluid surface down into the reservoir, maintaining the separation. Before reassembly, make sure the seal is fully compressed like in the second photo. 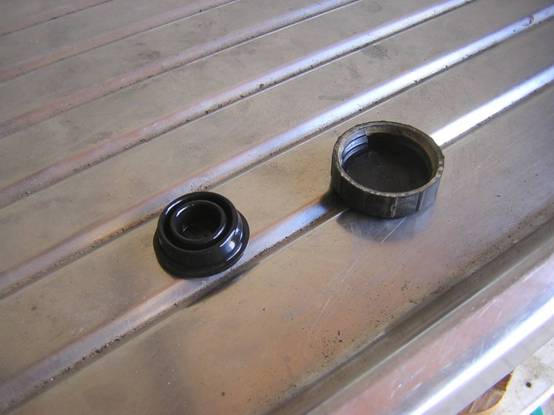 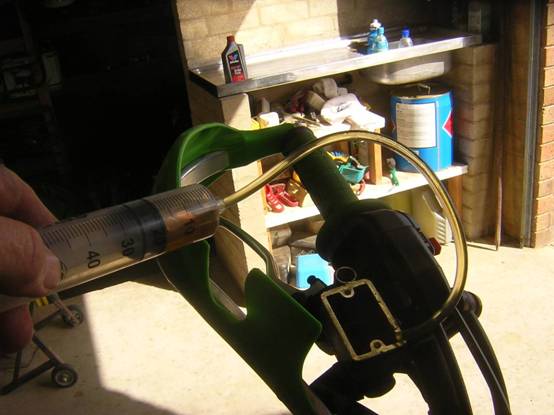 When bleeding fresh new fluid into the system we generally do it from top to bottom. This normally means that all the old fluid in the reservoir gets flushed through too. Avoid this by using the syringe to suck out most of the fluid and any grot first. And if we were to reverse flush, ie bottom to top, then we’d have no choice, as we need to make space for the fresh fluid coming up. 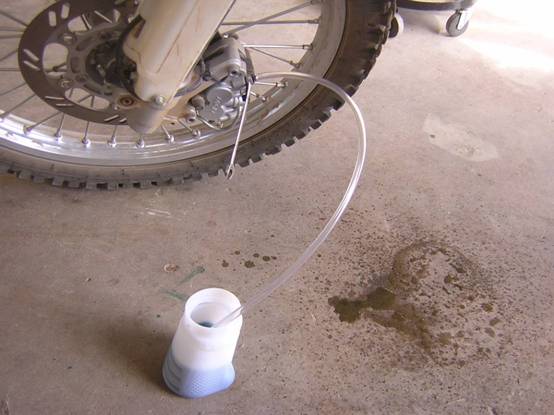 This photo shows the classic bleeding process. Having drained the reservoir and topped it up with fresh fluid, we now attach a ring spanner to the bleed nipple and a hose draining into a suitable container. The process can be undertaken by one person, although two can be simpler if you can get the coordination happening. It's a bit like CPR.

if you have a 'one man bleeder' then closing the bleed nipple is unnecessary in the above cycle, as the one way valve does the job automatically for you. Means that all you have to do is squeeze the lever in and out. 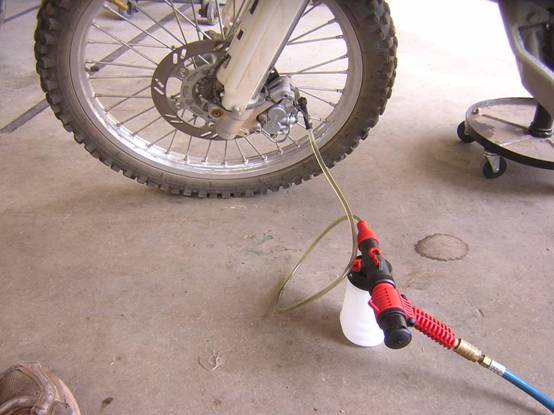 A vacuum bleeder is an easy way, but more expensive because you need an air compressor as well as the bleeder. It can help getting some stubborn air out and definitely makes it a one person job, especially the 4 wheelers. Be aware that when sucking fluid through, that air can be sucked in from around the nipple threads and it can look like there is lots of air in the system when there is not.. 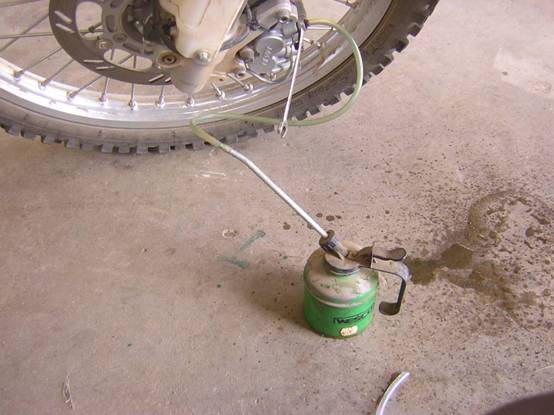 Sometimes the only way to get a stubborn air blockage out is a reverse bleed, pumping fluid in from the calliper. Remember to keep draining off the fluid from the reservoir before it overflows.

If it all goes smoothly it shouldn't take more than about 5-10 minutes a brake and one bottle of fluid should do a few bikes, so might as well do the fleet at the one time.

If its your first time, allow and hour and take your time checking each step to get it right.

Keep a log, or just mark the calendar, up so that you know when 2 years has expired and its time to do it again.