What, and how to carry stuff on your bike

CARRYING STUFF When going trail riding it is necessary to carry some useful stuff with you. Everyone should carry water to manage dehydration and sufficient tools to repair a puncture and undertake any minor repairs that can happen after a spill, both to bike and body. No one should assume that someone else on the ride will take responsibility for them and carry their spares and tools without prior arrangement.

So, what to carry with you on a ride and how best to carry it? HOW TO CARRY IT? An old favourite is a 'bum' bag that is attached to you with a waist strap/belt. This Kelly leather version has also had a couple of shoulder straps attached to stop it sliding down. You can also hang things like tubes and leatherman off the belt and some riders like to wear them as navel bags rather than bum bags. It'll probably do less damage if you land on it on your soft stomach rather than the base of your spine. 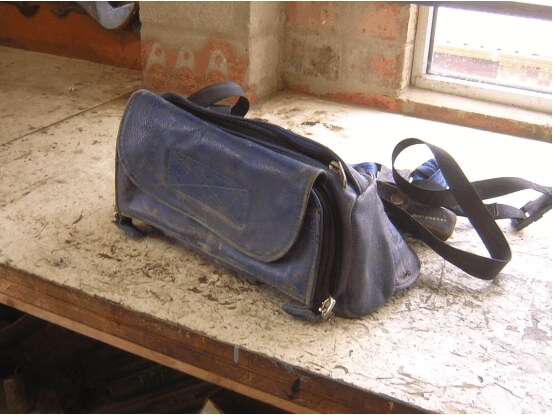 This picture is a of a Scott bag that is made of nylon rather than the leather of the Kelley. Not as durable, but not as expensive either. 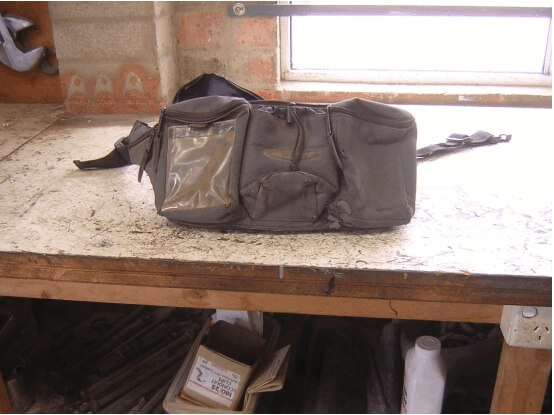 Another option that can be combined with a bum bag is a Camelbak. Camelbak is a brand name of a good quality product priced at the higher end of the market. There are many versions of these now available, often generically referred to as Camelbaks, but perhaps more accurately referred to as hydration packs. Not only can you carry some stuff with you, but you can have a bladder carrying water, or some other fluid to keep you hydrated through the day. Bladders range in size from 1.5 to 3 litres and packs range in size to suit. The one on the left in the picture contains a 2l bladder and not much else, the one on the right has a 3l bladder and has a number of pockets and an expandable section to allow you to carry things like a rain jacket, food and other good stuff. 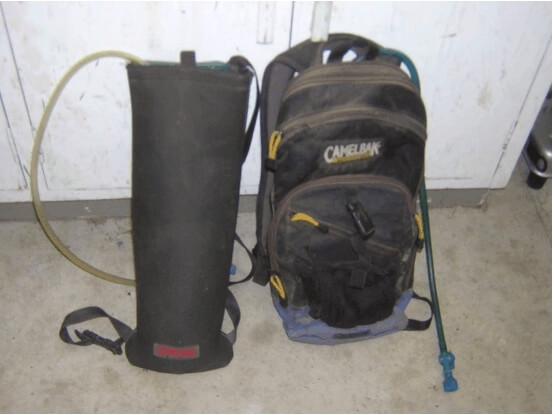 This picture is of a Blackburn pack that has provision for two 3l bladders as well as pockets and room enough for an overnight. Backpacks can move around a bit when riding, and the more stuff you load them with, the more they can annoy. 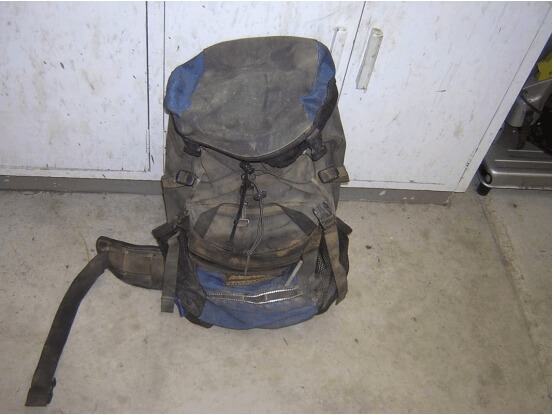 My current preferred option is the Ogio Flight vest. It has numerous pockets and when sitting over body armour doesn't move around. It also distributes the weight about more evenly too, and is hardly noticed when riding. The view below is from the rear, you can see the bladder pocket in the middle, which can expand to take two 3l bladders and two side pockets for stuff. If its not big enough on the occasional ride, it is still possible to wear a back pack over the top too. 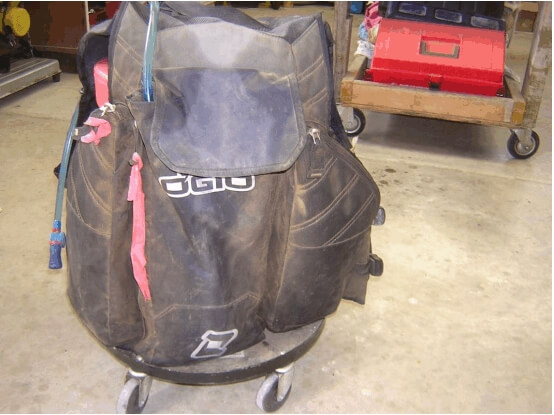 This is the front, chest, view, showing a few more pockets and a bag that attaches to the chest straps for even more carrying capacity. 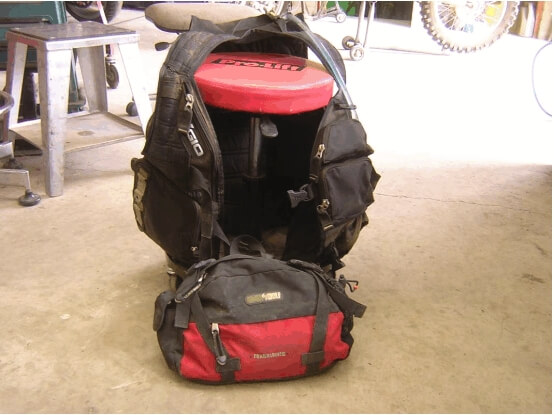 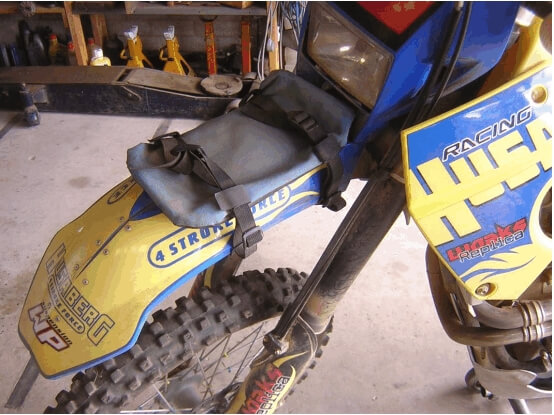 Another popular choice is a tool bag bolted onto the rear guard. This works well for heavier stuff, but can annoy some riders when getting on and off a tall bike, and can interfere with a rider's bum bag or backpack at times too when riding. 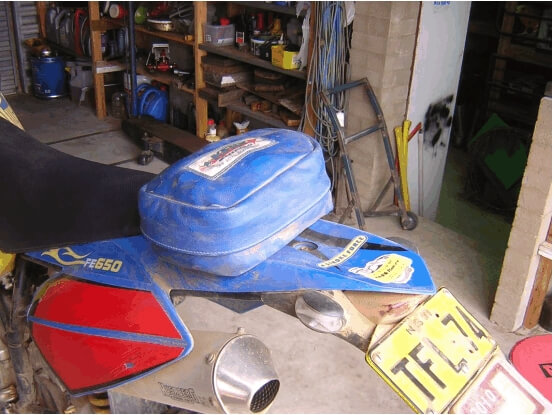 You can also attach stuff to the bike which is often preferable to attaching it to the rider. A fender bag can carry a tube on the front or rear guard. On the front guard, they can effect the steering noticeably if heavily loaded. 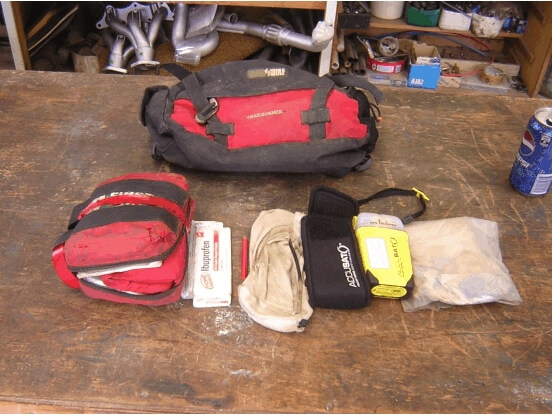 WHAT TO CARRY? Vest front right pockets contain some trail snacks, a roll of electrical tape, an emergency whistle, a rag, a headband LED torch and some water proof matches. 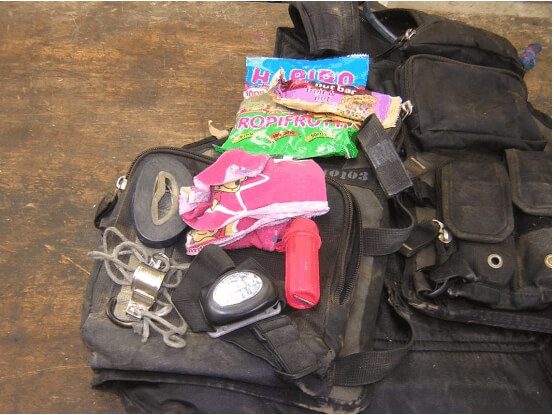 WHAT TO CARRY? Vest front right pockets contain a mobile phone, an old film container (remember those?) with magnesium pills for cramp management, lip balm, a UHF radio, a leatherman, a big screwdriver and a folding allen key set. 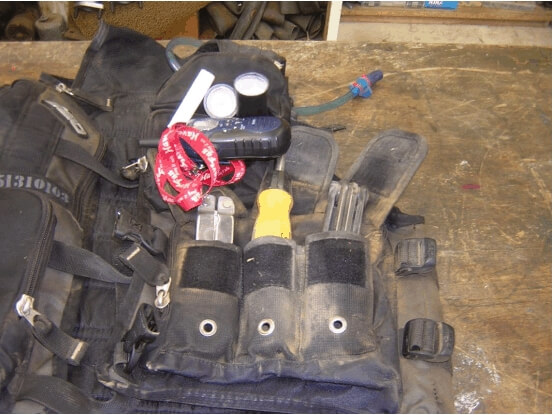 WHAT TO CARRY? Vest rear left pocket contains some spare nuts and bolts, tube patches and glue, chain breaker and assembly tool, some chain and spare master links, a webbing strap, a tube of kneedable epoxy steel, a folding saw and a bladder for moving fuel about if someone has run out. 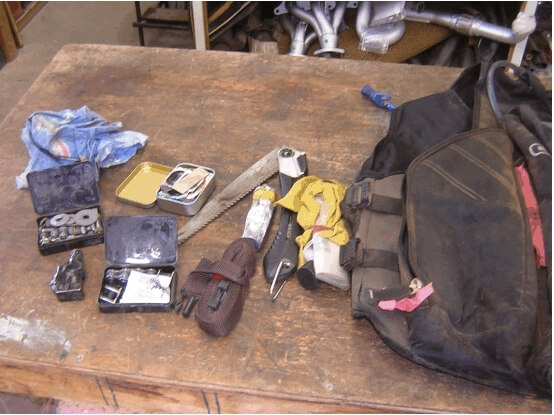 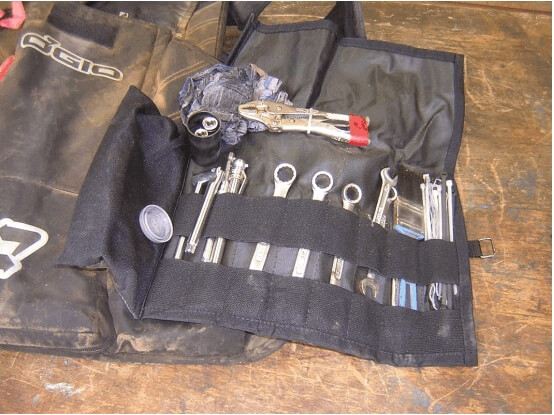 WHAT TO CARRY? The tool bag on the bike has, from left to right, a rag, a mountain bike pump, tow strap for Hondas, tyre levers, axle spanner, spark plug socket, some bike specific spanners including one to remove the float bowel drain, spare levers, spark plug and a 21" tube that'll be OK to get you home in the rear tyre too. 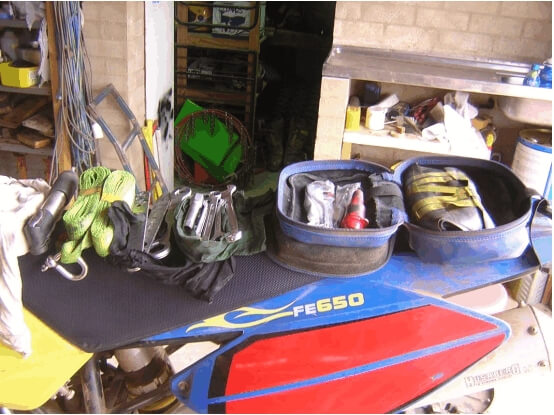 WHAT TO CARRY? Here is some/most of the same stuff when in the bum bag, the first aid kit and the leatherman hang off the waist belt in this case. 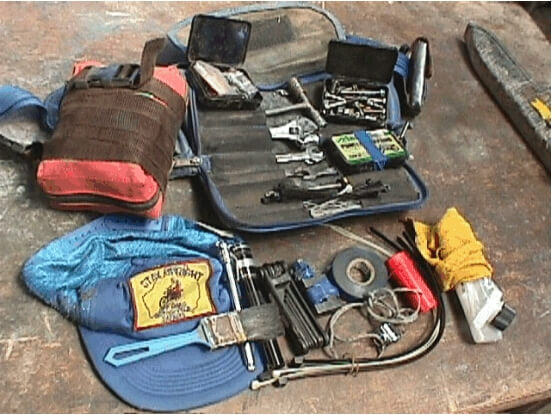 WHAT TO CARRY? You can also carry stuff elsewhere on the bike, in this case spare clutch and throttle cables zip ties to the frame under the seat. You can also run them parallel to the existing ones for a quick swap over. 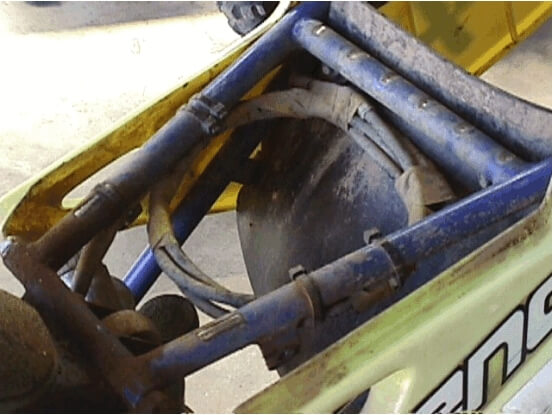 WHAT TO CARRY? Here a couple of spare levers and a spark plug in the red container are zip tied behind the headlight shroud. 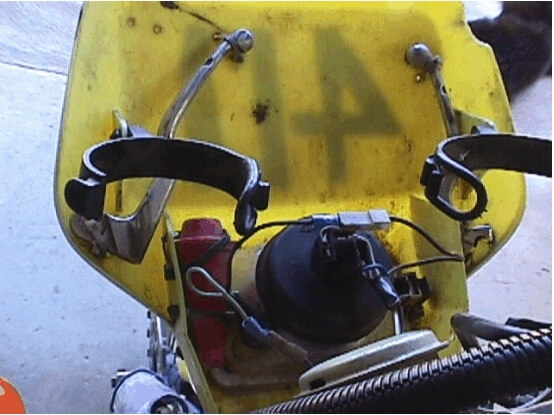